The difficulty I want 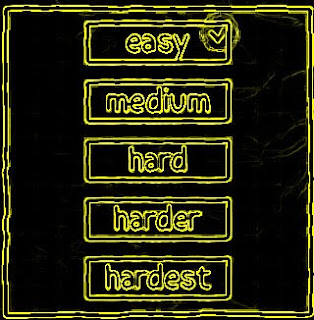 I got on a treadmill at the gym all ready to workout when it asked me a question I didn't know the answer to: "Difficulty Level?". I stared at the screen, which gave me no range, and to boot I had never run on a treadmill with an incline before. So I guessed 10. Turns out I think it was out of 10. Fortunately I didn't need to be Carl Lewis, when I realized things were getting way too hard, I just adjusted the difficulty down to 8 (ok 3). The point is, sometimes you don't know how difficult you want it to be until you've tried it.

So why don't we do this more in games? Many games ask you to choose a difficulty level up front, but don't allow you to adjust it later on when you realize you were wrong. Giving players access to Level of Difficulty settings throughout the game can not only help prevent them from being frustrated and putting the controller down, but also allow them to change the way in which they perceive and play the game.

I was playing "God of War" last week, a game I had always meant to play, but had avoided because it seemed like a hack and slash platformer, which is a genre that I've never been incredibly fond of (In case you're wondering, it turned out to be a hack and slash plat former). While playing it, I found myself enjoying the game quite a bit, though there were definitely moments of annoyance when I was punished for not being able to repeatedly push a button fast enough. At any rate I entered a room where I needed to beat everyone in it before the floor gave way. After several attempts I began to get frustrated, when suddenly on one of the restart screens I was asked if I'd like to switch to an easier difficulty.

Now normally I laugh at myself as the game took pity on me, and then defiantly answer "no" as if my wife had suggested we stop at a gas station for directions. But then I realized something. The elements of the game I was actually enjoying were things like story and atmosphere. And while I enjoyed some of the fighting, the thousands of baddies I had brutally murdered so far had somewhat soothed my blood lust. I realized that playing on easy would actually make the game more enjoyable for me, after all I still have God of War 2 left to play! So here's an example where not only I was reminded that I didn't need to play through the game frustrated, but was also able to play the game the way I'd actually prefer to play it at that point. What a clever God that War is!

Another interesting case for level of detail is "Oblivion" (ok, ok, Elder scrolls IV: Oblivion... nerds). This game had something I'd never seen before: a difficulty slider. Accessible at almost any time during the game. Moooore difficult.... Lessssss difficult. Sliders are so fun! So I'm playing the game and I get to a point where I want to silently assassinate someone (always a fun thing to do). I sneak into the house across the street, jump over to their balcony, slip in and stand over their sleeping body with a giant sword in my hand and glint in my eye. I rain my strongest attack down on their head and... they get up and call the guard? Now I was still able to kill them (I know you were worried), but I was very unsatisfied with the result. In my mind this game was fairly life-like on the tone scale (other than the magic, and maybe the vampires). This was not a giant Ogre wearing sword repellent, so in my mind, when one attempts to lop another's head off with a sword while they're sleeping, one generally succeeds. So what did I do? I snuck in, lowered the difficutly, lopped his head off, and then raised the difficulty back up. AMAZING. It was as if I had an argument with the designer, and won! As if he listened to my plight, installed a fix and I was able to continue playing the game I wanted to play. What would have been a frustrating complaint turned into a paragraph about a cool feature.

Now some might say that in doing this, you allow players to play the game in unintended ways, and this is a valid point. Someone may crank the difficulty down, and then forget to raise it up as they get better. This could cause them to miss out on some of the "tension" of exploring caves because they know they can't get hurt. I feel this is somewhat acceptable. The player knows how they want to play, and if my wife hadn't been able to crank down the difficulty I'm guessing she would've given up on the game (she also enjoyed exploring more than fighting anyway). However, there may be a way to have your cake and eat it too. What if you combined this with what "God of War" did? What if you remind players that they can raise the difficulty level if they haven't even come close to having a formidable battle? Many times a player would take such suggestions, they simply forget about these options and sometimes end up putting the controller down instead, because they don't know why they're not enjoying the game anymore.
Posted by Tim Keenan at 10:32 PM