Please help us raise money for children's hospitals across the country and around the world! Go HERE and donate what you can (you can donate any time)! Saturday Nov 2nd I'll be streaming from 12pm PT to 1pm PT hopefully on both the Indie Megabooth Twitch channel and our Misfits Attic Twitch channel (still figuring out if that's possible, if not use the Megabooth one). I'm attempting to hit a $475 goal so that the Megabooth can reach $10,000!

You can also tell me which game you want me to play (I listen best to donors!), either one of our three prototypes or something else... We're all playing games for 25 hours straight to raise money.

Thanks so much for caring and helping! Here's the schedule for the 25hr marathon!

[Update: 16 amazing entries to our Steam Card Contest! Go vote on our Steam Community Artwork Page. Voting will end in a week (midnight August  15th). With so many great cards we may have to pick more than one...]

One year ago today (August 1st 2012) A Virus Named TOM was let out into the world. It's been a crazy year, and to celebrate, A Virus Named TOM is 75% off for the next 48 hours on both our site and our Steam store page!

So fans have been asking us when in the heck we're gonna get our AVNT Steam Cards out already. Well help us out then! We're reserving a Steam Card for you :) Simply create an image (1920x1080), post it on our Steam Group art page, tweet it to us, FB message us, let us have it! We'll then hold a vote and the favorite will become an official AVNT Steam Card. Not an artist, or simply need some art assets to work with? Here, have a bunch: ZIP FILE (only to be used for fan art, please do not steal my wife & friends hard work).

BTW: if you're a Misfit, check your inbox for a bunch of presents :) (if not check your spam folder)

Here's an example AVNT Steam Card, and below a peek at the art assets you can download.

So everyone keeps telling me to do game jams, but I sometimes have trouble understanding how they can do this. I feel like I spend almost every waking moment working on the games that need to make me money, and have a wife & child that take up every other moment. Where can I find the time? How can I say to Holly: "Hey, take care of the kid for the weekend, Imma go work on a game, oh but not the one that I've been telling you will be done for the last 2 years..."

So there was an "indie cabin" that we put together to go to Tahoe and hang out & work on games together. I wanted to use this as an excuse to bang out a prototype I wanted to make, essentially do a game jam.  But as the date got closer I had so much to do I decided not to. Then when I got there I was so out of my day to day mindset that I decided to spend my 2 days jamming out my game, and did just that.

The Last Shadow prototype that I made at the cabin


I have to say, it was awesome. I got so much done, have the beginning of a possible new title, and feel refreshed. I spend so much time wearing my biz dev hat, my PR hat, etc, that I forget I can develop too sometimes. Not only that but it's what's most important. Holly saw the change in me instantly and is a strong proponent that I do this at least 3 times a year or so. She's awesome, and I've already married her so find your own! If you're a game maker: people care about us because of that, so let your PR be showing what you make, my weekly videos are trying to do just that.

As for the cabin, it reminds me yet again how incredibly fruitful it is to be around amazing and creative people. We played each others paper prototypes, games, and just enjoyed each others company. I'd like to do that 3 times a year as well ;) Thanks Brendan! 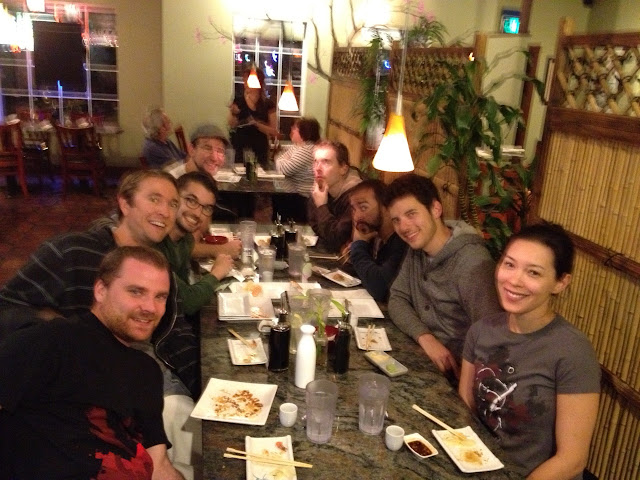 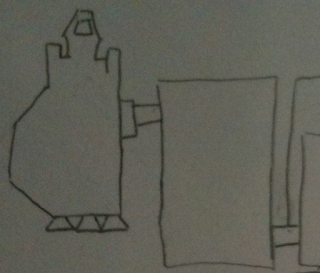 It's only an idea of a name, and possibly only for the prototype at that. Some have mentioned it may be too similar to Dust 514. Maybe we could go with Duskers. Feel free to comment or tweet at me with any thoughts.
Posted by Tim Keenan at 8:33 PM 2 comments:

How amazing is this: I forgot my badge one day at GDC, so I sent out a message that if any indie devs wanted to play my paper prototype of 'Chess the Gathering' they could meet me somewhere and play. Then Dave Carrigg, Erik Asmussen, David Evans, and Michael Carriere came to my rescue and hung out and played my infant prototype over some beers. I have to admit all GDC I felt kinda like the hot chick at a bar that forgot her wallet and is rewarded by being bought drinks all night, but really: indies are amazing and GDC is awesome.

Below is footage of some of the play through, but most importantly the design discussion at the end.

Again, I've fallen behind on posting videos. For videos 2, 3 & 4 of gamers playing CTG in the PAX East table-top area, check out the CTG playlist.

I took the "Chess the Gathering" paper prototype to the PAX East table top area hoping to see people play and hear what they thought. Jeremy & Kelly were the first ones to take a chance on a prototype and Jess Conditt (Joystiq) showed up in the middle to see the tom-foolery. I plan on posting the other 3 games as well. Then write a real blog post about it. Oh, and I missed about a months worth of updates so here's the Scavenger stuff you missed and here's a chat I had with Brian Cronin (Unknown Worlds/Natural Selection) about AVNT, CTG, & Scavenger :)

Posted by Tim Keenan at 5:06 PM No comments:

This week. Holly and I show a new paper prototype for a game we currently call 'Scavenger': where you control drones to explore/loot derelict space ships. We show the basic gameplay elements: dungeon crawling + a type of 'rolling' tower defense. For our other paper prototype check out our 'Chess the Gathering' playlist.

This week Holly and I finally show off the "digital" prototype for the first time. In this episode we show the level editor, basic pieces & movement, our first spell card, and a chat window! This series shows how we designed "Chess the Gathering", a board game mash up of Magic, Chess, and other geeky concepts. This is in response to questions about our "paper prototype" video. Video below!

Posted by Tim Keenan at 2:08 PM No comments:

Last week I forgot to post our third design video for "Chess The Gathering" so (oops) here it is. This week Holly and start making a digital version of the paper prototype and realize that the creatures and modifiers may be a bit trickier on a computer screen. Video below! 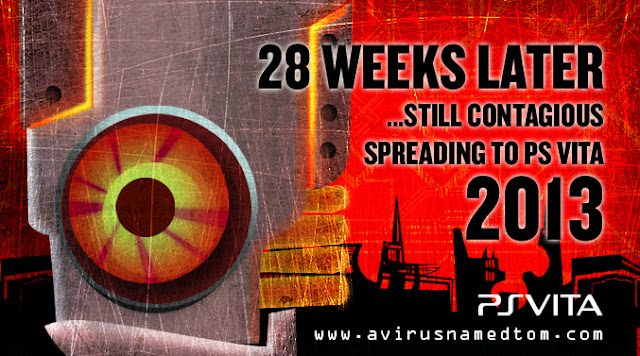 The irony isn't lost on us that it's "28 Weeks Later" and A Virus Named TOM is still contagious. As a matter of fact, AVNT will be infecting the Sony Vita and PlayStation Mobile certified devices this summer! To celebrate the impending doom, AVNT will be 50% off on Steam and at aVirusNamedTom.com for our 28th week (Friday - Friday: Feb 15-21). So if you're loved one wasn't happy with their chocolates and flowers, give them a virus!

The PSM version will have some new levels & features in store for you. We haven't completely figured everything out yet, but we're excited about adding touch controls for tablets & phone, and even some multiplayer possibilities :D

We're hoping to have something ready to show by PAX East and GDC, so if you're going to either drop us a line and we'll get it in front of you!
Posted by Tim Keenan at 10:21 AM 10 comments:

Continuing from Part 1, Holly and I go over how we designed "Chess the Gathering", a board game mash up of Magic, Chess, and other geeky concepts. In this installment we go over spells that modify creatures with new abilities, and murdering twins.

So after our paper prototype video on "Chess the Gathering" we got a lot of people asking us how the game plays. Then someone suggested we talk about the design process and how the game evolved. I'm not one to pass up on stealing a good idea, so here's part one of me yammering on about how the game came about. Holly on camera.... I should really put the prettier face in front of the camera, I'm new at this.