So first you decide to make business cards because GDC is next week, then you realize you need a graphic of some sort on it, and eventually if you’re not careful this all leads to you dealing crack on the corner. Here are some ideas we had that we feel will work for either direction the company takes: making games or dealing crack:

When I first envisioned the circuit game I started with the simple notion of energizing a circuit by turning its parts, or "tiles" to allow energy to flow (paradox 3000 is the most recent example I can think of). I then thought that perhaps once the circuit was energized, the grid formed by the edges of the circuit's tiles could glow to become prominent in the foreground, and then you could navigate a character along that grid, avoiding enemies, and making your way to the next circuit. Thus you're solution of one problem would lead to the starting point of another.

Now many games interweave various gameplay mechanics to various degrees of success. In some cases the gameplay mechanics complement one another and are both a major component of the game, such as the dungeons in Zelda where a mix of puzzle solving and action just feels right, culminating in a boss battle that exemplifies this balance by making you have to figure out a strategy for how to defeat the boss (puzzle), and then execute on that strategy (action).
In other cases the second gameplay mechanic might be very different, but limited to a small portion of the game. Usually this is a task, such as unlocking a door. These are usually dubbed as "mini-games" since they're almost like separate little games inside of the main game. The "hacking" that you do in bio-shock is a good example of this, where the main game is first person shooter and the mini-game is a type of connection puzzle. I feel that usually work well because they can serve as an opportunity to break up gameplay, preventing monotony without the risk of annoying the player that dislikes the mini-game, because either you’re not forced to do it (in bio-shock you don't HAVE to hack bots), or if you are you don't have to deal with it too often.

Things seem to get murkier when the gameplay is both different AND a major part of the game. People can be divided on this and while sometimes it's the fault of bad implementation and balance, sometimes it may just come down the player’s tastes. I thoroughly enjoyed ActRaiser (c’mon people let’s take a walk back to super Nintendo). In this game you play as a God (a familiar setting to me) where you go down to earth to clear some demons from a land (side scrolling action). Then when you clear that land you build it up with followers sim-city style (god game). Throughout the game you go back and forth between these modes. I feel they did a good job implementing these mechanics since they made the switching between them predictable and instigated by the player. It wasn't that I was constantly being thrown back and forth between modes, when I felt I was ready to take on a new land, I knew I'd be playing an action game, so if I didn't feel like that at the moment, I could continue to build a previous area.
However, had I hated either side scrolling action or top down god games, I might not have liked the game. I recall reading a review for Call of Juarez, a game in which you alternate between playing a pistol packing preacher (guns blazing) and a bow and arrow yielding drifter (stealth). In it the reviewer complained that he (bias or not) enjoyed one experience much more than the other, and as such felt as though he had to trudge through half of the game that he didn't like to play the half he did.

So I guess, like many things, there are pluses and minuses to how greatly and how often you vary gameplay mechanics. As for me I decided not to go with interweaving the gameplay. I integrated the two mechanics into one gameplay style, and when I came up with another I added it as a separate gameplay mode. I felt that in my case it worked better that way and it made it so I didn't constantly have to worry about balancing the two against each other. But someday I'd love to give something that does mix it up between two gameplay mechanics a try.
Posted by Tim Keenan at 1:34 PM No comments:

Gots me some projects

I put up some descriptions of the games I'm making. Dunno why, I just did. (You can also go to the "Current Projects" link on the sidebar).
Posted by Tim Keenan at 7:11 PM No comments: 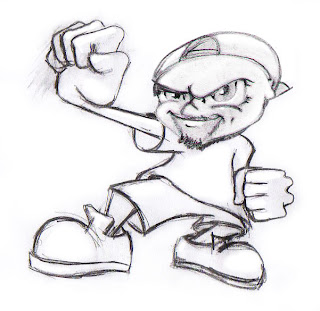 I guess I'm setting this blog up, partially because I like to hear myself talk (I talk while I type, it's really annoying the other people on this plane), but mostly it's because I'd like to get more info out there for other small game companies. I'm planning on documenting the various aspects of creating a small studio, and more importatnly, some small games. I'll attempt to break things up into categories using labels (design, art, programming, etc.). Hopefully I can add to the collective knowledge of small game development with my fumblings, or worst case, I get to tell cute chicks at a bar that I have a blog about game development. I'm just saying it's AN angle.
Posted by Tim Keenan at 7:40 PM No comments: